Every culture every society every group of people rank the members of their culture,

society, or group into some sort of hierarchy. This ranking of categories of people is called social stratification. As a result, every culture, every society, and every group of people is marked by inequality with some categories of people receiving more power and advantage than others. Even though we say, “All men (and women) are created equal”; in reality, some men (and women) are more equal than others.

In the United States, are system of stratification is an open class system that is based primarily on economics. We use the terms upper-class, middle-class, and lower-class, to describe our hierarchy. In our system, people in the upper-class have most of the power and most of the advantage, while people in the lower-class have the least amount of power and are the most disadvantaged.

According to Jesus, we have things backwards.

What does stratification have to do with biblical justice?

Is there such a thing as spiritual stratification?

If there is, and I believe there is, it is a product of man and not of God, for God sees everyone equal.

I believe the answer is yes! Let me explain:

Upper-class Christians are those who have a certain religious piety about them that comes off as arrogant. They believe in sin, but their sins are not as bad as others. In Jesus’ day, the Pharisees and Sadducees would have been the upper-class Christians. Today, these people are still the religious hypocrites among us. Upper-class Christians have a hard time hanging around and relating to people who are not like them. They understand grace, but somehow, and on some level, think they deserve it…at least more than others.

Middle-class Christians feel bad about their sins; they know they could have been better. Yet, at the same time, they are thankful their sins are not as bad as other peoples. Like their upper- class friends, middle-class Christians believe in grace, but feel on some level they have earned their standing with God through their own hard work. Yes, God’s grace is “free” at the beginning; but it is really a loan you pay back over time, with interest. 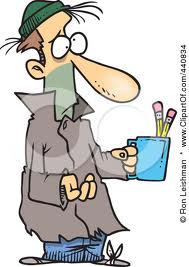 People may think they are upper-class or middle-class Christians, but in reality, if we are Christians at all, we are lower-class.

And the sooner we realize our true standing before God (lower-class Christians saved by  upper-class grace), the more our eyes will be opened to the real needs around us.

Upper-class Christians have a hard time with social justice issues – it’s beneath them; it’s someone else’s problem.

Middle-class Christians have a hard time with social justice issues – they have their own problems; everyone should work as hard as they have worked.

We all come to Jesus with empty hands. We are all lower-class.

“Grace makes you just. If you are not just, you’ve not truly been justified by faith.”

Here is another, more extensive quote from Generous Justice:

“My experience as a pastor has been that those who are middle-class in spirit tend to be indifferent to the poor, but people who come to grasp the gospel of grace and become spiritually poor find their hearts gravitating toward the materially poor. To the degree that the gospel shapes your self-image, you will identify with those in need. You will see their tattered clothes and think: ‘All my righteousness is a filthy rag, but in Christ we can be clothed in his robes of righteousness.’ When you come upon those who are economically poor, you cannot say to them, ‘Pull yourself up by your bootstraps!’ because you certainly did not do that spiritually. Jesus intervened for you. And you cannot say, ‘I won’t help you because you got yourself into this mess,’ since God came to earth, moved into your spiritually poor neighborhood, as it were, and helped you even though your spiritual problems were your own fault. In other words, when Christians who understand the gospel see a poor person, they realize they are looking into a mirror. Their hearts must go out to him or her without an ounce of superiority or indifference” (locations 1230-1239).

“Grace makes you just. If you are not just, you’ve not truly been justified by faith.”