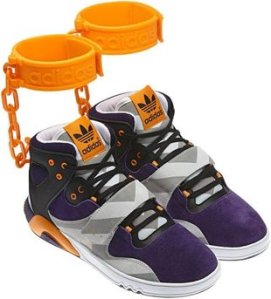 Did you guys see the article about the sneakers designed by Adidas with the shackles on them? (If not, here is a linkto that article.) Some influential people cried foul, claiming the shoes were racist because it brought up images of slavery. One commentator referred to the shoes as “Adidas Amistad Originals,” a reference to the famous African slave ship that was the site of a slave revolt in 1839. Enough pressure was put on Adidas for them to pull the shoe from production. (A necessary move, but a good move none-the-less.)

What do you think about these shoes and the controversy? Are they racist? Are they merely insensitive?

My take is I can’t believe someone at Adidas wasn’t smart enough to stop these sneakers before they ever went to marketing and production. Anyone could have seen the possibility of controversy these shoes would cause. The shoes are in poor taste, regardless of what the designer had in mind.

Are they racist? Possibly. As a person of the dominant culture I really can’t judge things like that, and it really doesn’t matter if I think they are racist or not. If enough African-American’s say they are racist, I have to take them at their word.

Again, what do you think?